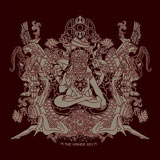 Last time I heard Aukland based Kiwi stoner groove merchants Arc Of Ascent  I was reviewing their excellent ‘Circle Of The Sun’ album in 2010, which you can read here. In the throes of moving house at the time, I received the CD at the time when all my possessions were in boxes and as such that album lived in my car stereo for a couple of weeks and I loved it.

Back now with their latest opus ‘The Higher Key’ and with me in a very different place, would this hold as much weight?

I am pleased to say all the elements of what made ‘Circle Of The Sun’ so very good are still very much present. The band churn out riffs the size of Tsunamis when they want to, whilst balancing the ability to temper them with turns of spaced out psychedelic melody.

The foundation of the band remain the same. Lamp of the Universe man Craig Williamson remains the creative heartbeat of the band; painting these lofty astral influenced slabs of early Monster Magnet like seismic shockwaves with impressive vocals, whilst drummer John Strange and new guitarist Sandy Schaare have the skills to bring focus and drive to the music.

Starting out with Celestial Alter’s almost subliminal subtlety, it is not long before the band let themselves off the leash and let the track breathe, creating something that is quite mesmerising. It is easy to listen to the music and hear it strike familiar reference points such as Kyuss, Fu Manchu, Cathedral etc but without ever sounding derivative of them.

The six tracks on this album are no throwaway three minute pop ditties, but the fact they seem to move along without ever outstaying their welcome makes this album extremely listenable as no sooner than the opening seven and a half minutes have flown by, the band then wrestles your attention back with Land of Tides and it’s fantastic middle section and robust chords.

Redemption builds to a towering sing-a-long that shows how effective a singular riff can be used to propel a track to great heights and tops it off with a deft solo, before burying its hooks deep in you while Element Kingdom sounds almost like a nod to Didgeridoos and tribal music before a filthy doom stomp emerges.

Lyrically this album carries this astrologically inspired theme throughout, conquering images of swirling stars and heavenly bodies, at times you may have no clue what the band are talking about but it sounds almost regal and uplifting. And fucking cool!

I feared my last encounter with Arc Of Ascent  was a passing phase, one that would fade with the rising of some other element, but I am delighted to say that ‘Circle Of The Sun’ was no fluke. If you wanted melodic, doomy space rock then get familiar with this band as they are simply great.

If anything ‘The Higher Key’ ahem, eclipses their previous outing…