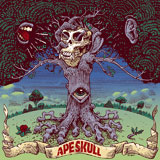 As music technology progresses at an alarming rate and any old Tom, Dick and Harry can be thrown into a recording studio and be made to sound halfway decent with the minimum of ability, it is heart warming to see that there are still bands who reject this reliance on new fangled computer rubbish and rely more on just plain sounding good by taking a vintage stance. Italian three piece Ape Skull are unashamed in betraying their influences claiming to have a desire to reproduce the sounds of 1969 to 1972. Certainly in their little corner of Italy the last 41 years have never happened.

Everything about this album screams retro from the way the songs buzz with that reckless, blues based groove laid down by the wave of proto metal acts such as Jerusalem and Iron Claw to the actual sounds. Guitarist Fulvio Cartacci sounds like he’s burning the fuck out of the valves on his amp to achieve that rich, warm broken sound that so many people have been chasing since but can only be achieved by using a piece of proper vintage kit.

Drummer Giuliano Padroni not only lays down a sweet groove throughout that acts as a bedrock for Pierpaolo Pastorelli’s tasteful yet complimentary bass lines, he also possesses a decent set of lungs, not too dissimilar to Rod Evans in his Captain Beyond days. In fact Captain Beyond isn’t a terrible point of comparison for Ape Skull. Whilst Ape Skull may not possess that band’s more overt, out there prog tendencies and opt for more of an edgy blues rock sound but both bands have been cut from the same sonic cloth. Whereas Captain Beyond were at the forefront of an explosive and expressive style of music Ape Skull pay faithful and respectful tribute to an era when bands favoured musicianship and the vibe over the technology, a time when bands had to stand or fall on their ability over their looks, a time when Black Veil Brides would have been lynched from the nearest tree!!!

Picking out individual tracks would be pointless here; each of the nine songs is a little nugget of retro gold with just enough funk, groove and soul under its hardened blues coating. No one song stands out as either a crowning moment or a real stinker as the song writing is even and consistent throughout. This album does raise some questions, however, when it is possible to obtain copies of albums that 20 years ago may have seemed impossible to find, by bands such as Truth and Janey, Jerusalem, Iron Claw, Granicus…etc either through the reissue market or by MP3 rips on the internet, how much of a market is there for bands who reproduce the style and sounds of that era so faithfully? In the case of Ape Skull I hope it is a case that sheer ability, vibe, enthusiasm and, above all, great songs will win out as here is a band that plays with flair but, more importantly a passion that seeps out of every groove.

Alongside fellow countrymen Doctor Cyclops it seems that Italy could have a burgeoning retro rock scene to rival their Scandinavian counterparts. Ape Skull have a minor gem on their hands here. Now it’s time to chuck their gear in their van and hit the road as this is music designed to be played live, loud and proud!!!