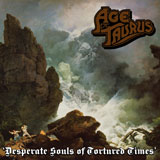 The words “hotly anticipated” do not even come close to summing up how I have been salivating to hear this album. I remember many moons ago, I ran into the right honourable Reverend Riddell outside a gig (Grand Magus and Electric Wizard, I think?) and he introduced to a jovial fellow who turned out to be none other than Toby Wright, a name I’d heard in connection with a hotly-tipped demo, “In The Days Of the Taurean Empire”. I purchased a copy of said CDr off him, and proceeded to play the ever-loving shit out of it over the next few months, and waited for the promised album to emerge. A concert in America (with a different lineup) followed, along with various performances (including many with Angel Witch!), but still no album. It seemed like the record was never going to happen, but good things come to those who wait, and finally, with London’s biggest Maiden’n’Marmite fan Alastair Riddell (formerly of Mourn and Blood Island Raiders) on second guitar, Age Of Taurus have produced forty minutes of heart-stoppingly brilliant epic heavy metal. It was worth the wait. Tipping its sonic hat to NWOBHM, classic doom, Seventies hard rock and just plain old ‘EAVY METAL, this record simply gets better and better with every listen.

The first song alone should be enough to sell this album to any self-respecting metal fan, given that the twin guitar attack that starts “A Rush Of Power” is straight off the first two Trouble LPs, before exploding into a gallop of NWOBHM-tinged goodness and fist-in-the-air chorus! All set to exemplary heavy metal lyrics of myth and beast – yes, we’ve heard it all done before, but rarely this good! “Sinking City”, an ode to the wrath of God coming down to destroy, is a gargantuan mid-paced stomper – you can almost hear the slow headbanging that must have gone on in the studio whole tracking this one! “Always In The Eye” has the epic sweep and virtuosity I’d expect from Wishbone Ash (if they hadn’t gone to pot!), although the main riff that kicks in at forty seconds is total Danzig being buggered by Running Wild (bit tenuous perhaps, but sod it, I like the simile and it works for me!). “Walk With Me My Queen” has the mournful breadth of scope (and HUGE drum fills) that made the first few Candlemass albums so great. Wright’s vocals are at their best on this song too, in fact, it’s safe to say that Felipe of Procession has had his first serious competition in years in the “best (male) doom metal singer” stakes. It’s great to hear some “proper’ singing for a change; there’s so much gimmickry in music these days, in execution as with presentation, and it’s really refreshing to hear a band doing everything free of irony or fancy studio tricks.

The title track is possibly my favorite track on the album, not just for the best singalong moment of the album (“IT IS ME YOU SERRRRRRVE!”), but also because the riffs and tones are reminiscent of Iommi circa “Mob Rules” and “Heaven And Hell”, two albums which pretty much define everything traditional no-nonsense trad metal should be (see also Solitude Aeternus!). “Embrace The Stone” continues the early Eighties Sabbath through Trouble vein, giving bass player Richard Bruce his moment in the sun, bulldozer attack! The album is bookended by “The Bull And The Bear”, and is a perfect ending to an album that has an absolutely perfect arc, and includes another staple of the REAL heavy metal album: a moment where the singer screams: DIIIIIIIE!! I got some dodgy looks on the tube for raising my fist in the air along with this one (true story, I’m sorry to say).

If there is one fault to be found in this album, it’s that the band have fallen into the trap of making extra music available to those that can afford it. In typical Rise Above style, the “Die Hard” edition will come with an extra two tracks (one of which I understand is a cover) in the form of a 7” – it’s collector-baiting crap, and I really HATE this practice. And it’s totally unnecessary too; a band as good as Age Of Taurus does not need gimmicks to be sold to a discerning public, and I am disappointed that this album is not being marketed with the bullshit-free spirit that has gone into the making the brilliant music contained therein.

But depressing salesmanship aside, there is NO EXCUSE for someone who likes genuine heavy metal not to own this truly exceptional album. In a way, it’s the album I’ve been wanting Manilla Road to make for the last few years; it is epic in every way you care to mention – lyrical, musical and visual (courtesy of Philip James de Loutherbourgh – nice to see someone other than John Martin being used). If Manilla Road had continued along the path set by “Open The Gates”, instead of the more (very good!) thrash oriented stuff of the late Eighties, they might have ended up sounding like Age Of Taurus. This album is everything you expect it to be and more. A perfect forty minutes of brilliant songwriting, fantastic guitar playing (ZERO pretension) and swashbuckling! “Desperate Souls Of Tortured Times” is an album that brings back memories of why you started listening to metal in the first place, and any album that achieves that deserves respect, repeat listens and adulation. Flawless.