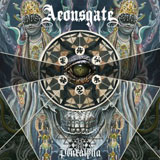 An hour long piece of music is going to be a challenge for any band, but an all new doom ensemble debuting with one, hour long song as a first release? It speaks of either a cockiness or madness, I’m not sure which, to create something which is so immersive as your premiere outing. In Aeonsgate‘s case, the fact that the project is made up of seasoned musicians allays the fears slightly with members having worked with the likes of Candlemass, Kreator, Stephen Wilson and underground doom acts like 8 Hands For Kali.

The song, Pentalpha tells a story through the medium of doom metal, of a man minutes after his death. To build a story within a song, length will always be needed to some degree. But they key is try and not let the music go off the rails if you’re going to create a piece this long, and Pentalpha is somewhat hit or miss in that regard varying between compelling moments, and points where it all gets a bit tedious.

There’s a concentrated effort to build atmosphere right from the start, but the song feels like it has four intros before it gets going – we get an introductory synth piece, then spoken words over some violins, then a clean guitar rings in some picked phrases under an ominous vocal…and then there’s sorted of jammed atmospheric part. It’s clear even up to this stage that Jondix, the man behind the project, is going to ram as many ideas into this song as he possibly can, wether they work or not. With these four sections, the two vocal led sections work well to build suspense and atmosphere but the other two feel tacked on, and don’t really contribute much to the song as a whole. Finally we get a recognisable riff coming in over the full band and we’re off after all the false starts.

Mats Leven‘s vocals lend an almost theatrical gravitas necessary to the song and being the emotional core throughout, as the foursome move from riff to riff and each lengthy Sabbathian workout to the next. Indeed the sections with the vocals are the most compelling as we listen to hear where the story goes next. And Jondix himself adds some fine guitar work, with a killer solo around the 17 minute mark. There’s some creepy organ work that comes in to enhance one of the key verses just after this, before another ripping solo comes along. However, it hits you that the riffs themselves aren’t quite as distinctive or memorable as they need to be for such an epic piece to work. And while I understand the idea is to create a trance through repetition in parts of the song, interest wanders early on. By the time we’re half way through, it’s clear the direction has been lost as we just run through dragged out circles of the same riffs. The song seems to be going nowhere, and really doesn’t need to be this long,

To be honest, this could have made a fine EP if it had been edited. it does not need to be over an hour long, and it becomes self-indulgent and plodding, not unlike just listening to a band jamming over and over again and there’s no sense of momentum. The promise in the early section is steamrollered in an endless procession of solo, riff,solo,riff till we’re back to the synth outro.

It’s by no means a bad piece of music, but it just doesn’t grab the listener the way it needs to and doesn’t have the epic atmosphere it needs. There’s a great idea here, but it just hasn’t been channeled or directed the way it needs to be for something so long to work. This should be a journey full of peaks and troughs but unfortunately, after about 20 minutes it feels like being stuck in traffic.